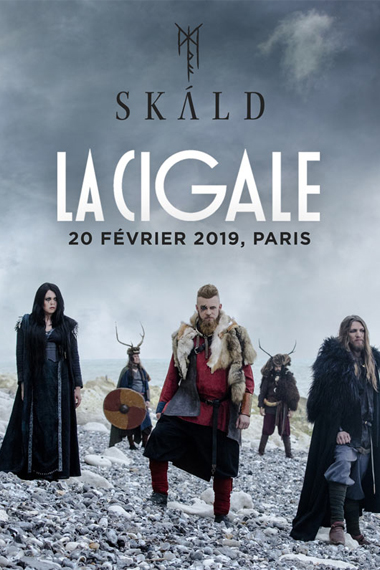 SKÁLD presents his album « Vikings Chant » for the first time on stage.

SKÁLD is a music band inspired by Nordic mythology. Developed over time by a group of enthusiasts, the project originated when producer-composer Christophe Voisin-Boisvinet encountered a trio of talented singers whose voices had atypical timbres: Justine Galmiche, Pierrick Valence and Mattjö Haussy. Together they decided to breathe new life into the poetry of the ancient skalds, whose ancient language – Old Norse – told stories of the Vikings and their gods. SKÁLD immerses the listener in a rich, evocative soundscape created using a broad palette of instruments chosen specially for the occasion (shamanic drums, talharpa, jouhikko…) and reveals the wealth of Scandinavia’s culture. Thanks to SKÁLD, you will board the famous langskips that accompanied explorers of the impossible on voyages to discover unknown lands; you will engage in awesome battles that ring with the clash of axes and swords as they strike the shields of warriors; you will dance in the midst of the Völur, the priestesses who foretell the future — and then, in a state of trance, you will cross the Bifröst on the back of Odin’s horse as a guest invited to the banquets of Nordic gods.