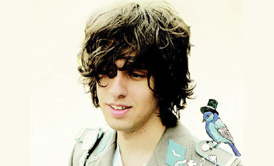 Recorded towards the end of 2005 in New York’s Dumbo Studios with the band who accompanied Green on his recent tours, and the string arranger from Friends Of Mine – all under the watchful eye of long-term producer Dan Myers (Granddaddy, Rival Schools). If Green’s previous records were colourful, this one bursts into full cinemascope.